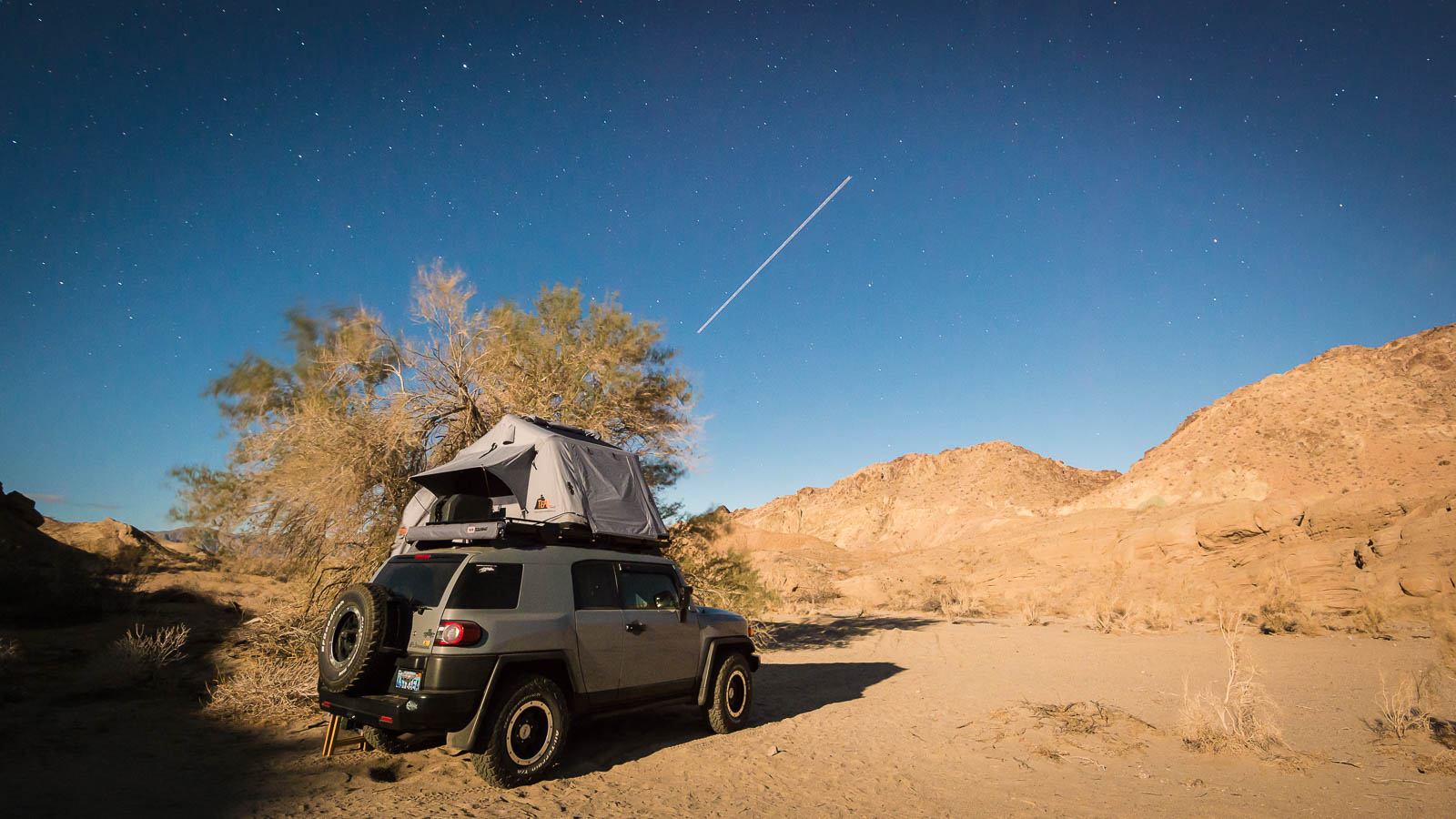 In between Part 3 and Part 4 of our FJ Cruiser overlanding build-out, CrtrGrl and I did a trial run of our new roof rack and roof top tent. We wanted to try out sleeping in the tent and also see how the FJ Cruiser (Greyjoy) drove with the new weight on the roof. We hadn’t yet installed the camp kitchen that was built in Part 4, but we had our ARB fridge in the back.

The only things we needed to bring were food, water and camera gear. Oh and our little dog Indi. 🙂

Check out the really cool video that CrtrGrl made for for our trial run:

On our way to the desert, we stopped at Lake Henshaw to check out a flock of American white pelicans. Apparently, 2018 was the first time they were seen at Lake Henshaw. They are showing up in more new locations in San Diego County due to declining fish in the environmental disaster that is the Salton Sea, where they historically spend winter.

We watched them resting in the lake and flying in formation in the mountain air currents. Pelicans are one of my favorite birds, with so much personality, and the American white pelicans are beautiful! With their large wingspans and striking white and black feathers, they definitely stood out in that landscape.

After communing with the white pelicans, CrtrGrl and I found a secluded, dispersed camping spot in a canyon in Anza-Borrego State Park. We picked a spot next to a large tree, which provided some shade and privacy. A few trucks passed by during the middle of the day, but after that, we had the place to ourselves.

We set up camp by opening up our roof top tent and zipping in the full annex. We also opened up the rear awning for shade. A few white puffy clouds passed by in the light breeze as CrtrGrl prepared salad and sandwiches with plant-based sausage, sauerkraut, peppers and avocado. As we watched the sun set and the full moon rose, I got out my camera to do some night photography.

We slept well in the roof top tent, with our small dog Indi in between us. The Tepui mattress was just enough padding and our 2-person sleeping bag kept us plenty warm. In the beginning, we were nervous about the part of the tent that is held up by the ladder, but after going up and down a few times, we found it to be sturdy.

The next morning, we took a walk and explored our surroundings. The canyon branched out into small alcoves that ended in steep walls. During the rainy season, our camp site could be underwater during flash flooding. We were awed by the stark beauty of the desert and the creatures that can survive in those harsh conditions.

A beautiful morning greeted us outside the roof top tent

As the sun came up, so did the winds. We hiked up onto a small ridge above our campsite and enjoyed a view across the desert floor, as the wind threatened to push us off. When we got back to our campsite, the wind ripped out one of the stakes holding the rear awning in place and flipped it up and over the FJ. We learned that stakes don’t work well in the sand, at least not when it’s windy. The awning ended up with a bent support pole. Fortunately, ARB sells them individually and they’re pretty cheap to replace. Now we carry empty burlap sandbags to hold the tent and awning in place when it’s sandy.

With the winds making things less than comfortable in our little desert oasis, we decided to pack up camp and look for another place to stay. Folding up the roof top tent has a little bit of a learning curve, but does get easier with practice. We found that the annex wasn’t quite worth the effort, at least in fair weather and without the need for additional private space.

CrtrGrl and I headed west and up the mountain to check out Lake Cuyamaca. The cloud cover increased, as the temperature dropped. When we arrived after lunch, it was about 40F and the winds were even stronger. Knowing that it was going to get below freezing and might even snow, we decided we weren’t prepared for those conditions and decided to continue home.

After one night camping out in our FJ Cruiser taught us a few important lessons and helped shape the design of our camp kitchen. It was a good stepping stone as we built out the rest of our design. On our next outing, we had the full setup complete and were ready to test it all out before our long road trip.

Yesterday, @CrtrGrl and I decided to finally take

New blog and YouTube video is up on our #offgrid w

Our FJ served us well in Death Valley National Par

While exploring the farther reaches of Death Valle

@CrtrGrl comes out of an abandoned mine in Death V

Nature is at the core of the bond that @CrtrGrl an

For us, overlanding is about the places it takes u

Dispersed camping is our favorite way to experienc

It was a family effort to install the new Front Ru

With our overland setup, we returned to the scene

This was the first step in our FJ Cruiser overland

All comfy and cozy in our roof top tent! Even our

That one time we explored Death Valley NP over New

This was the first dry run of our overlanding setu

Crtr Grl didn't want to give up the driver's seat

This was the day it all started - trading in our T

By clicking Submit, you agree to send your info to Forest2Sea. We agree to only use it according to our privacy policy.